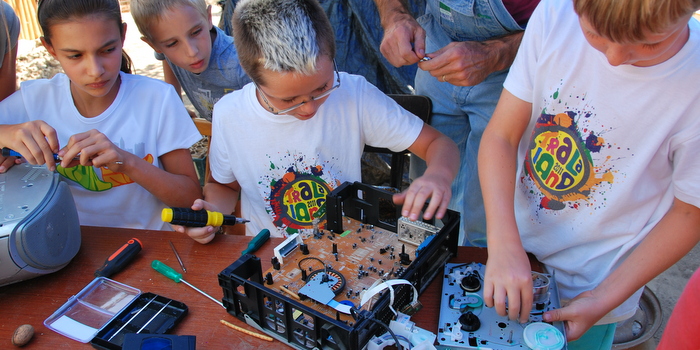 After two days spent in the backyard we set on a trip to the woods with knifes in our pockets. Originally, we wanted to get kids some practice in using pocket knives and lash a structure made of hazelnut branches, but the events had a different twist to them once again 😉
Jana stayed home to cook lunch and in stead of her the grandpa joined as as a forest guide. He knew of a place with an abundance of young hazelnut trees.  While I helped kids to find and collect some suitable sized sticks, the grandpa was teaching them some basics of whittling. 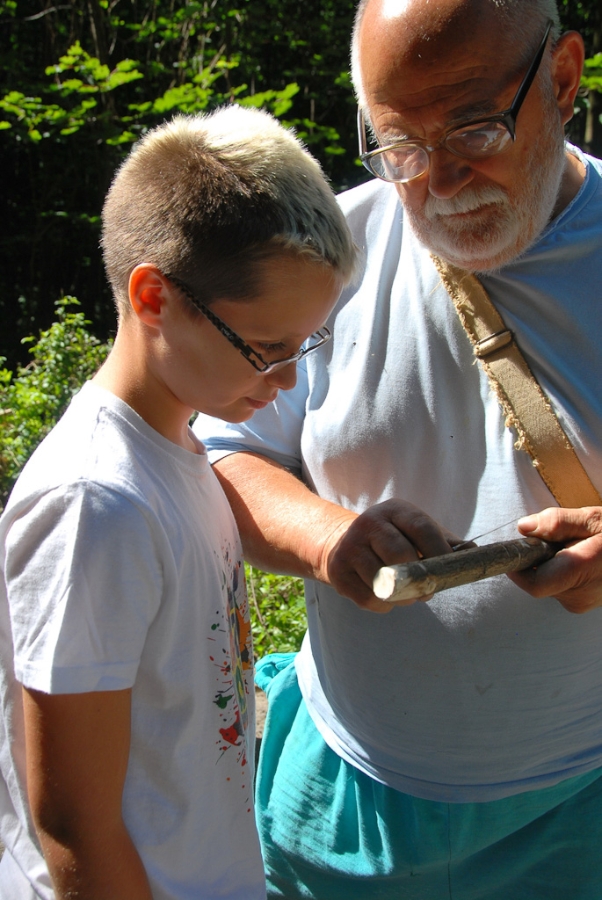 Mário got to next level - cutting out crosses and smiley faces. 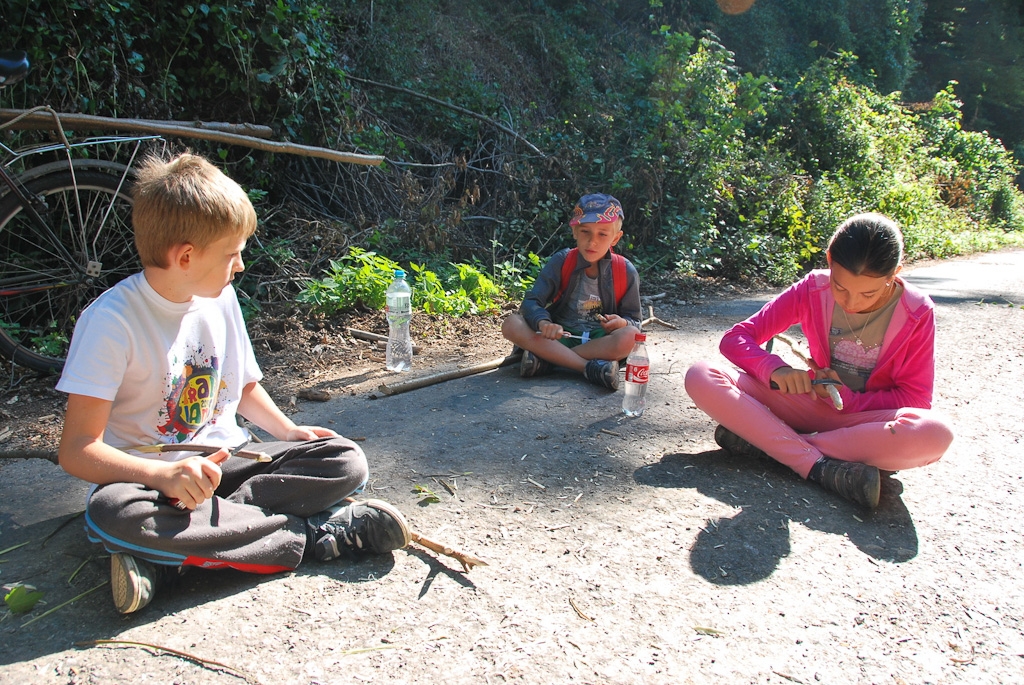 We made a home base in the middle of an unused forest road. 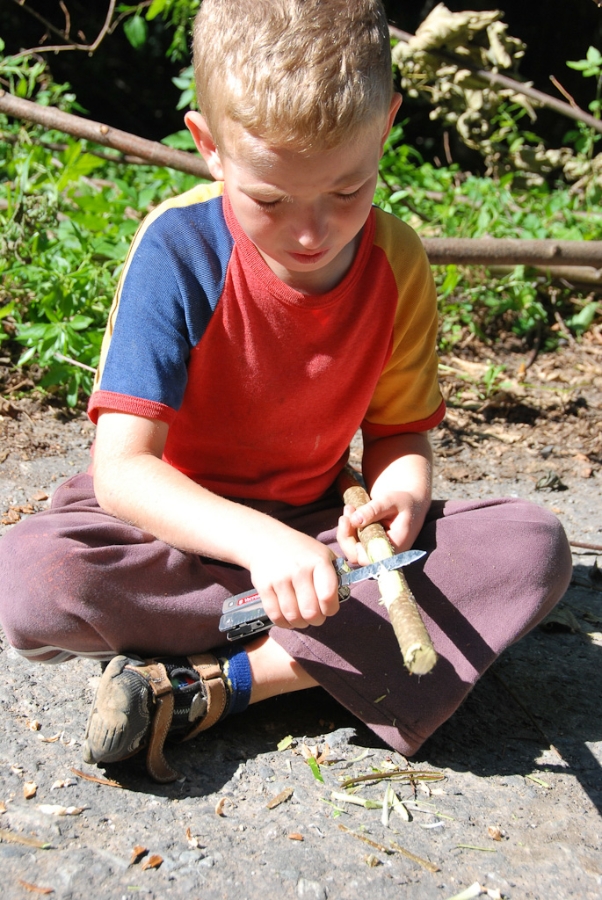 Michael is removing bark and bast like an expert. Although the knife handle was too big for him, the knife was sharp, so he was doing well.

If it wasn't for that backpack in the background, it would have been like a scene from an amazonian indigenous village with Indians making poisoned arrows for their next hunt. 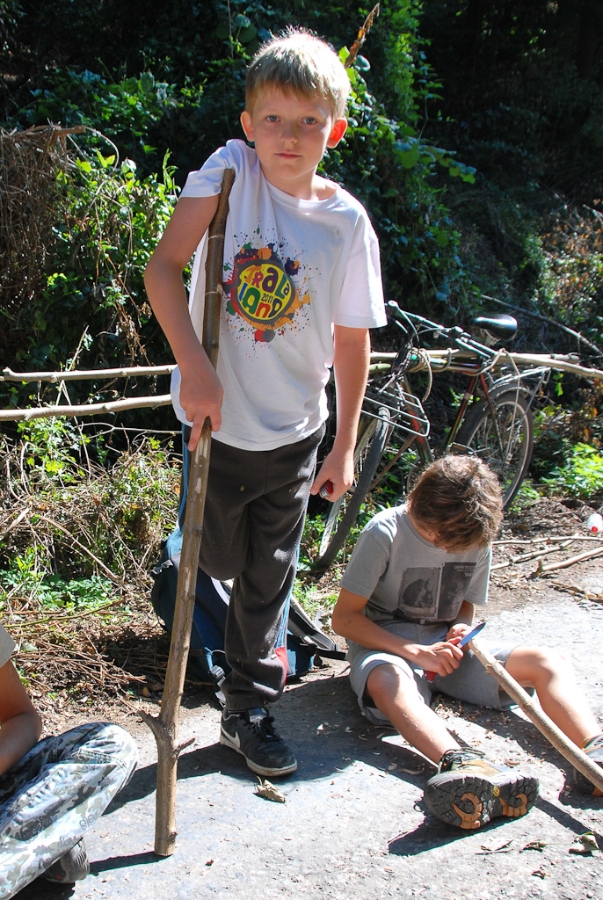 Yuri lost his leg. Luckily he whittles a crunch shortly before it happened. Otherwise we would have been in deep trouble. 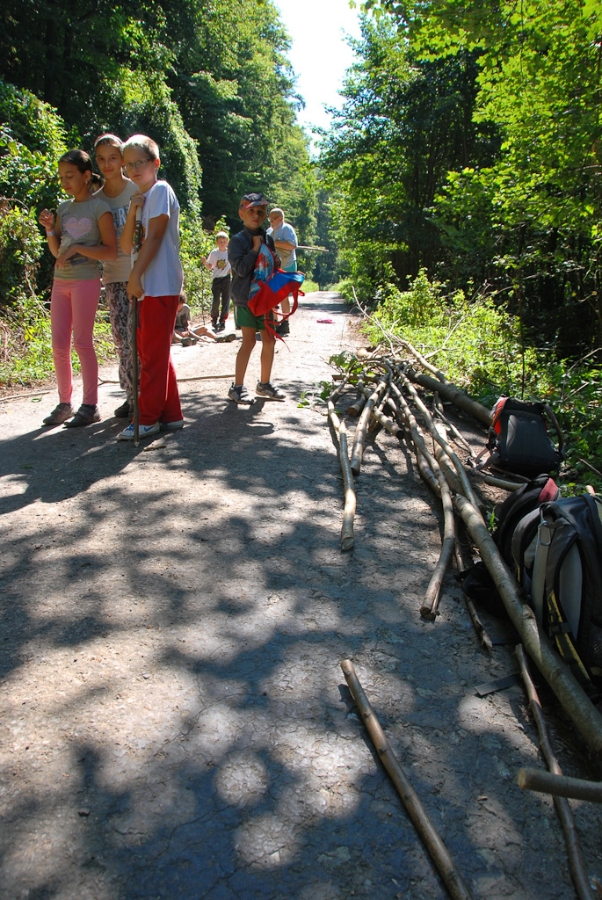 Branches for our afternoon project are ready. We just need some Sherpas now, who would carry all those branches from the forest to our base camp. Mario, Pavla and Ema are leaning away not to be in the picture. Haa haa, the beauty of a wide-angle lens :-) 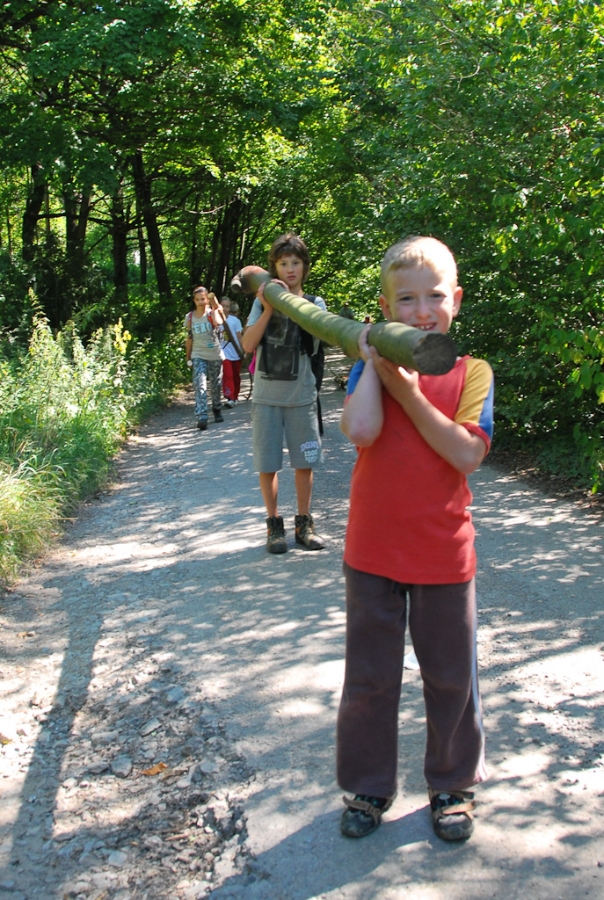 Michael and Mathias put the largest log on their shoulders and off they went. The rest of us had hard time to catch up with them. 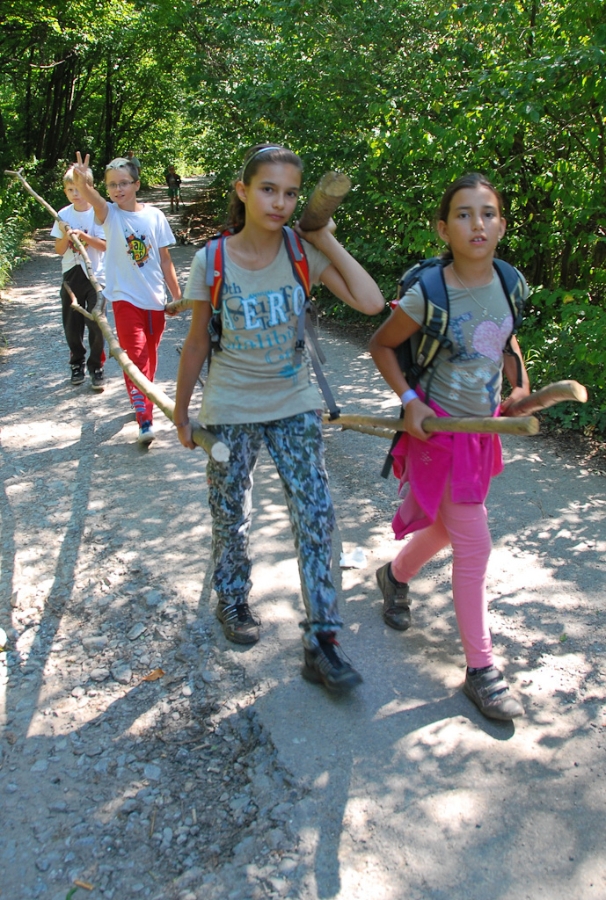 But the others put on a great load, too. 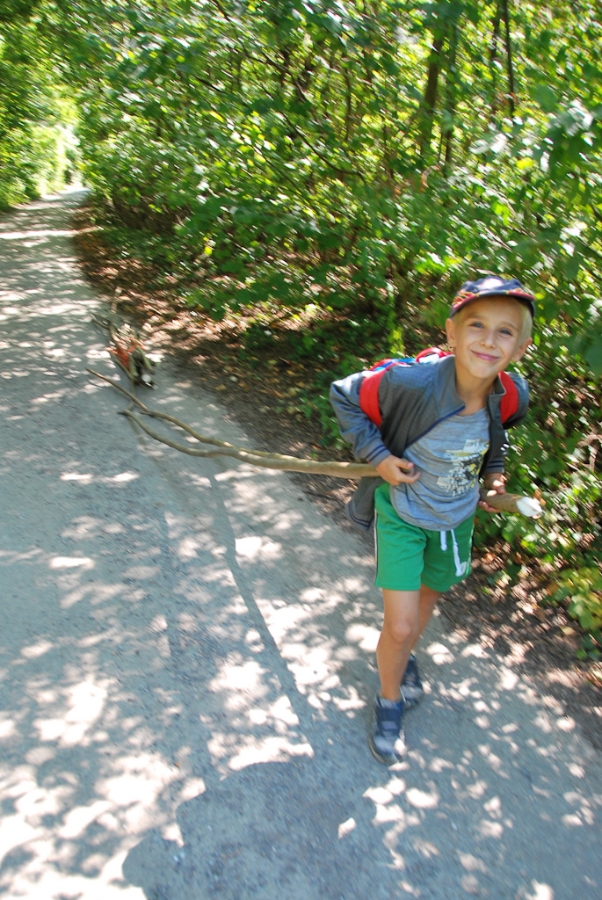 Even Thomas - the youngest member of the expedition - didn't stay behind. 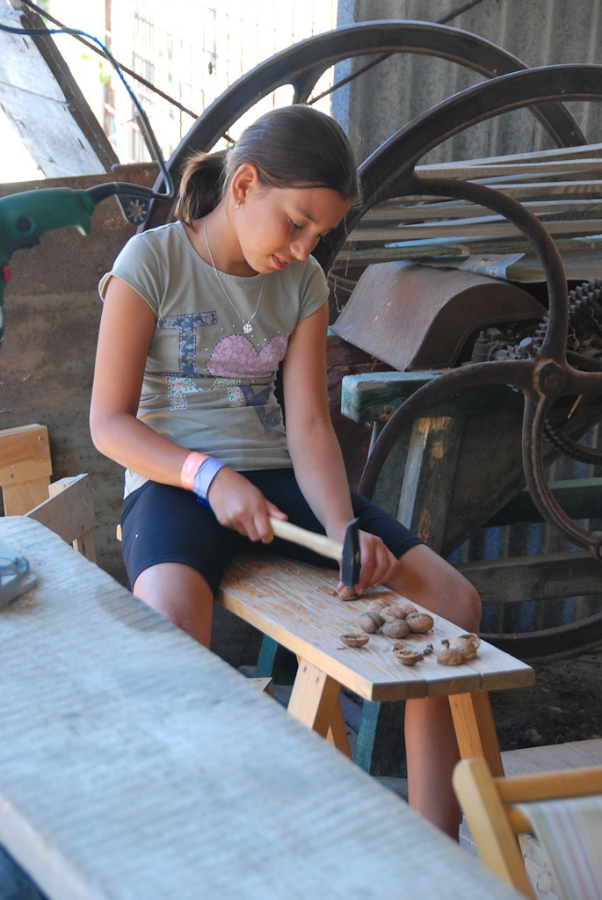 We successfully brought the wood to our yard. There was still a little bit of time left before the lunch for kids to jump on the net. After lunch everyone took it easy and relaxed. Thomas felt like cracking walnuts and since repeating good ideas is welcomed in Tinkering School, soon everyone was cracking nuts. Some using conventional methods ... 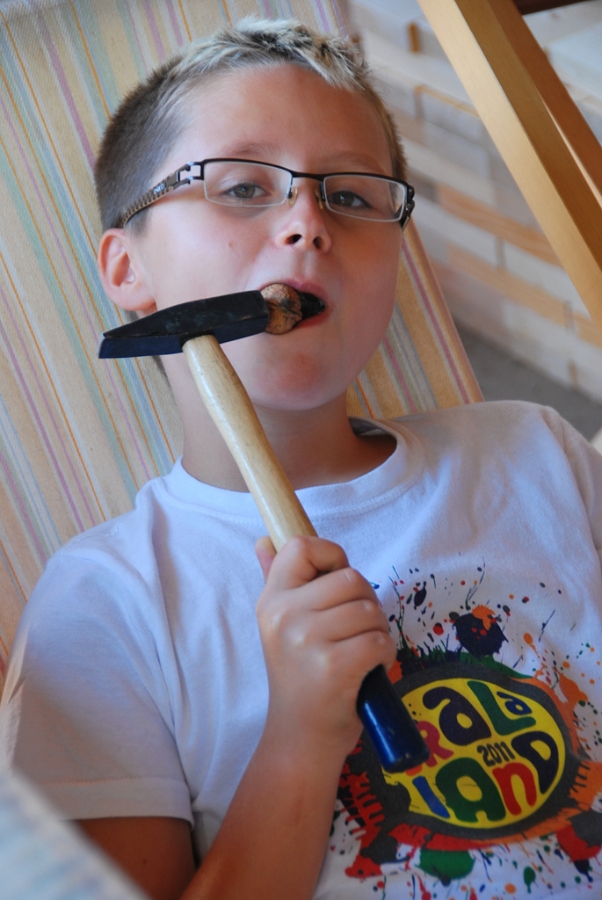 ... yet others going it freestyle. 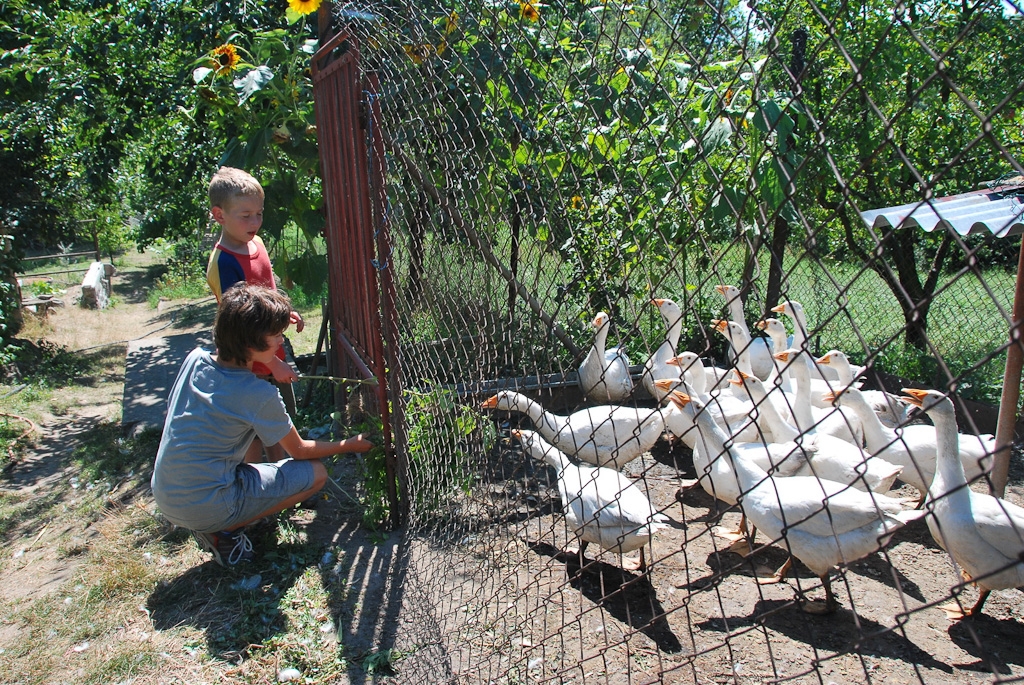 In the meantime Michael and Mathias went to feed vegetable to chickens and geese. 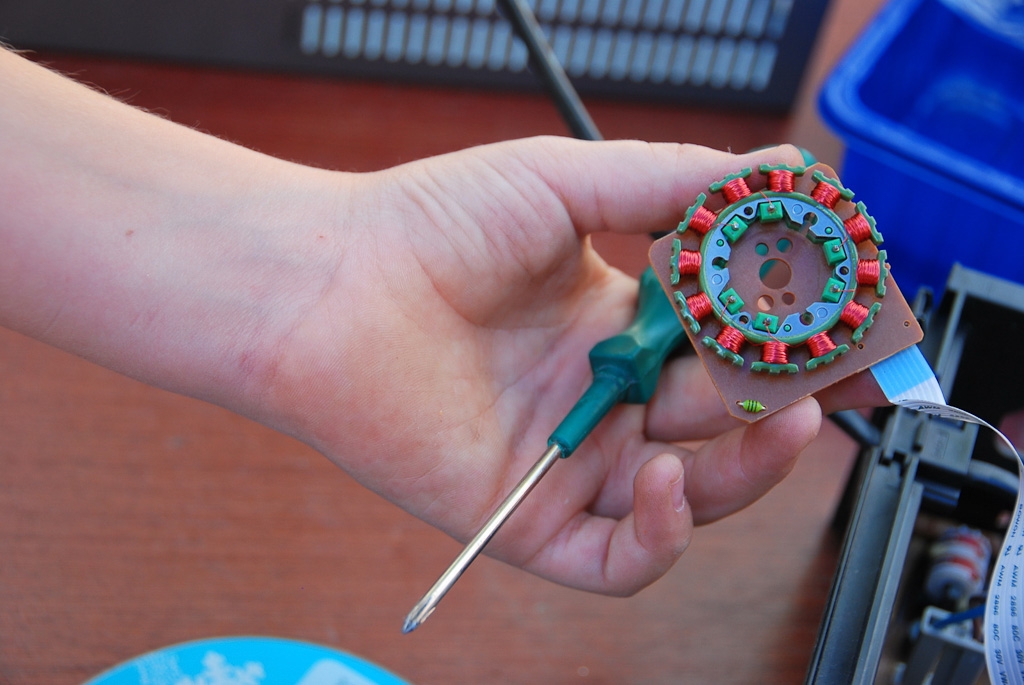 All kids were clearly enjoying moments of tranquility so we changed our plans again and chose a "relaxing" activity: deconstruction of electronics. 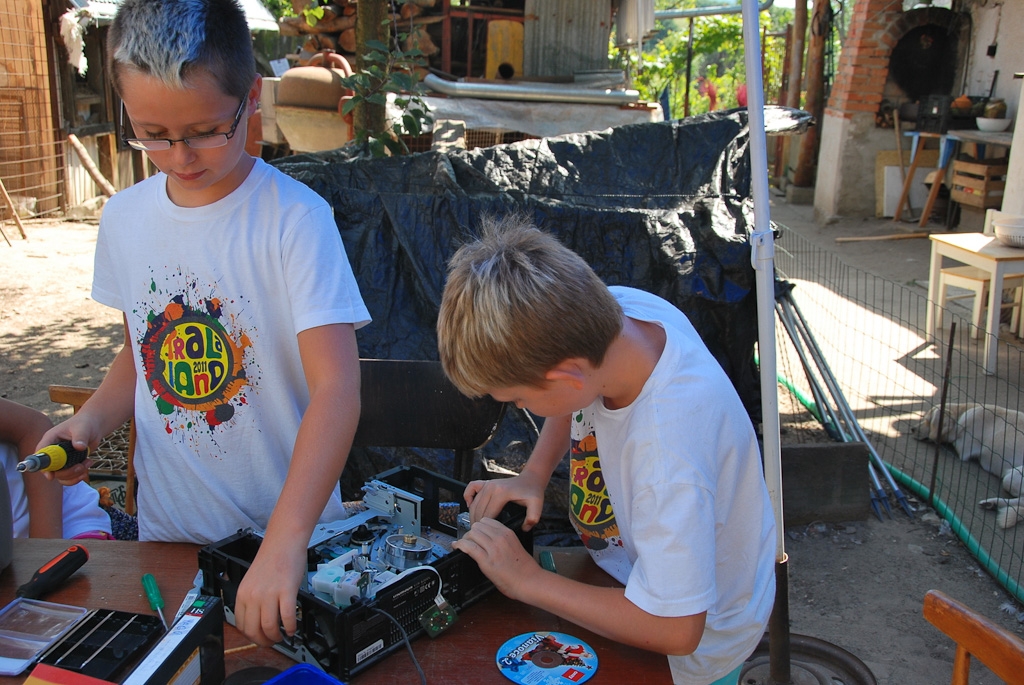 The purpose was to disassemble an appliance without resorting to force and to find out how it was put together and what's hidden under its cover. We also looked for any fancy parts that we might need for another project later on. 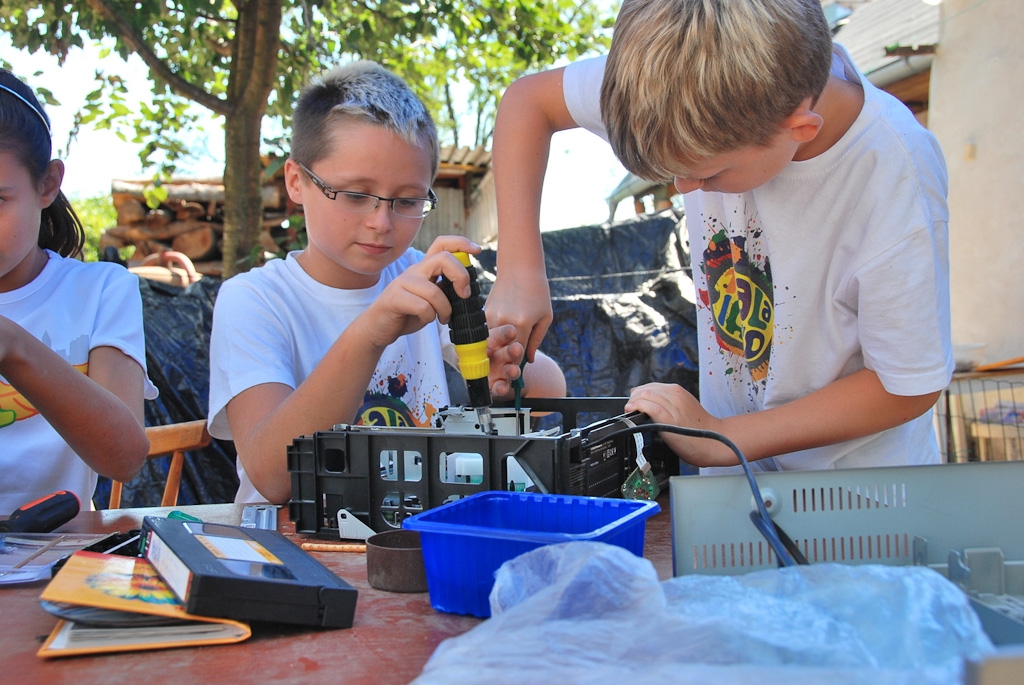 We were certainly curious about what might find under the cover, but non of us was ready for the secret an old VCR was about to reveal. When Mario and Yuri removed the cover, there in the loading mechanism, behind a stuck video tape, they found also three salty sticks, two DVDs and a mini-album with a dozen of pictures in it! Probably some little tinkerer in the house ;-) 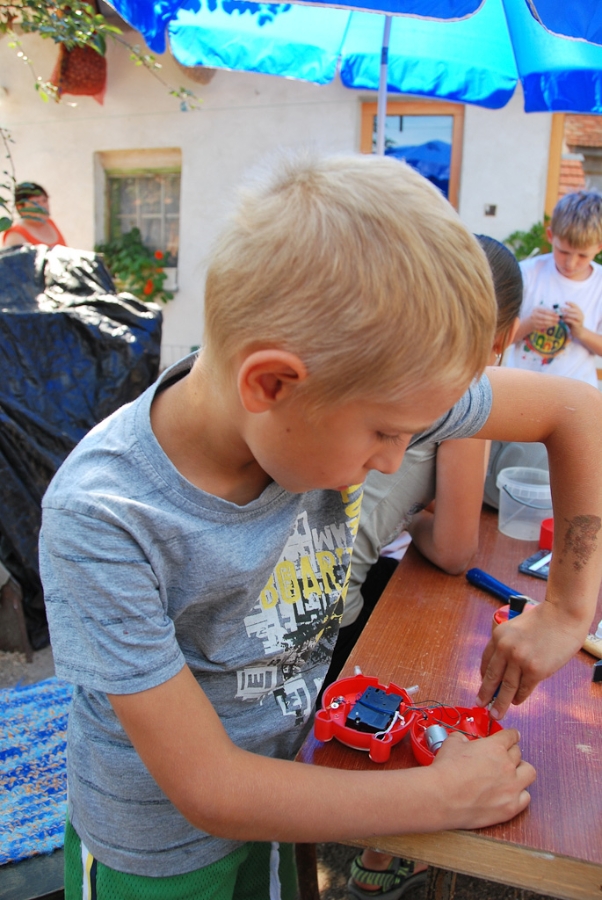 Rather than gears Thomas found a motor in the alarm clock. 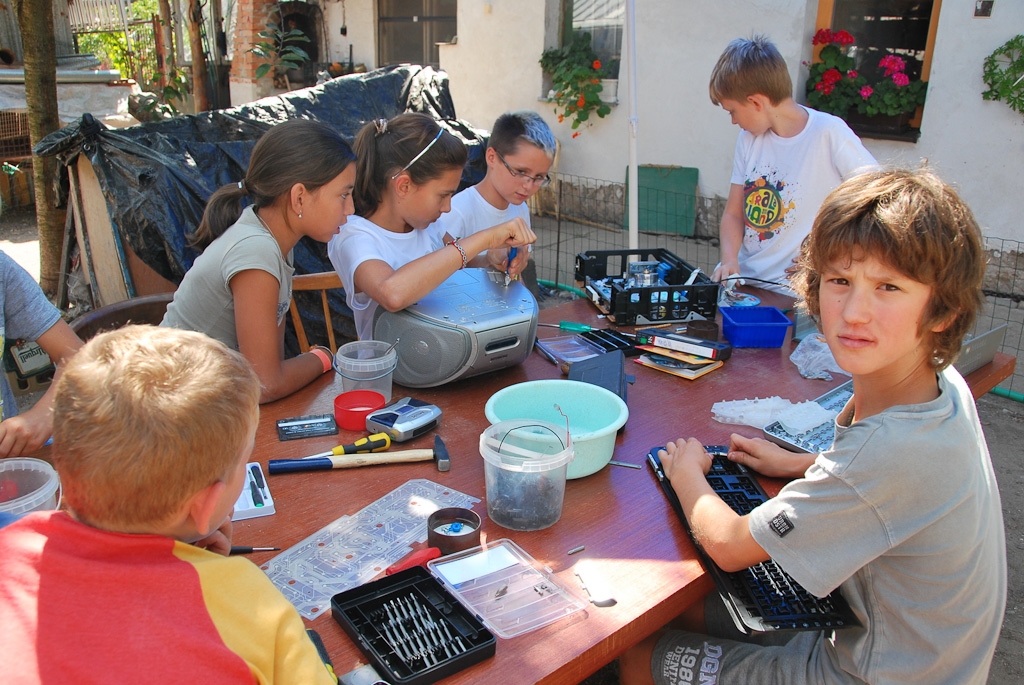 Screws of various sizes and shapes turn out to be relatively challenging to remove for kids. To find the right bit - slotted, phillips, allen, torx, ... for the screw driver was not easy for them. No time for me or Jana to take pictures. They all need help. 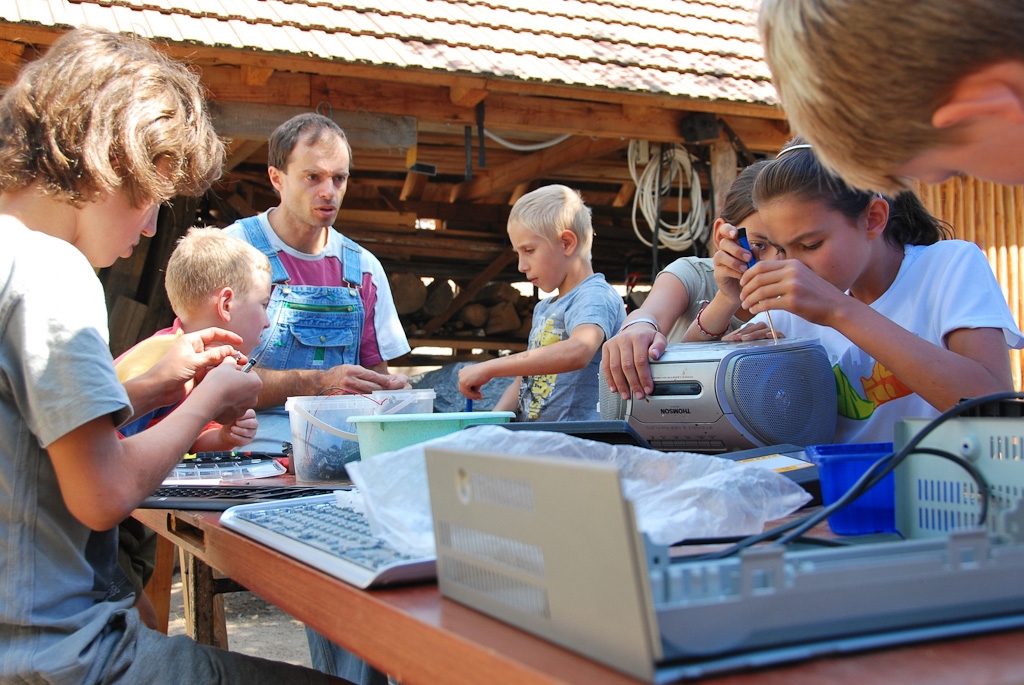 Pavla and Ema for quite some time now have been trying to unlock the secret of an old cassette player. But the screws just wouldn't give. 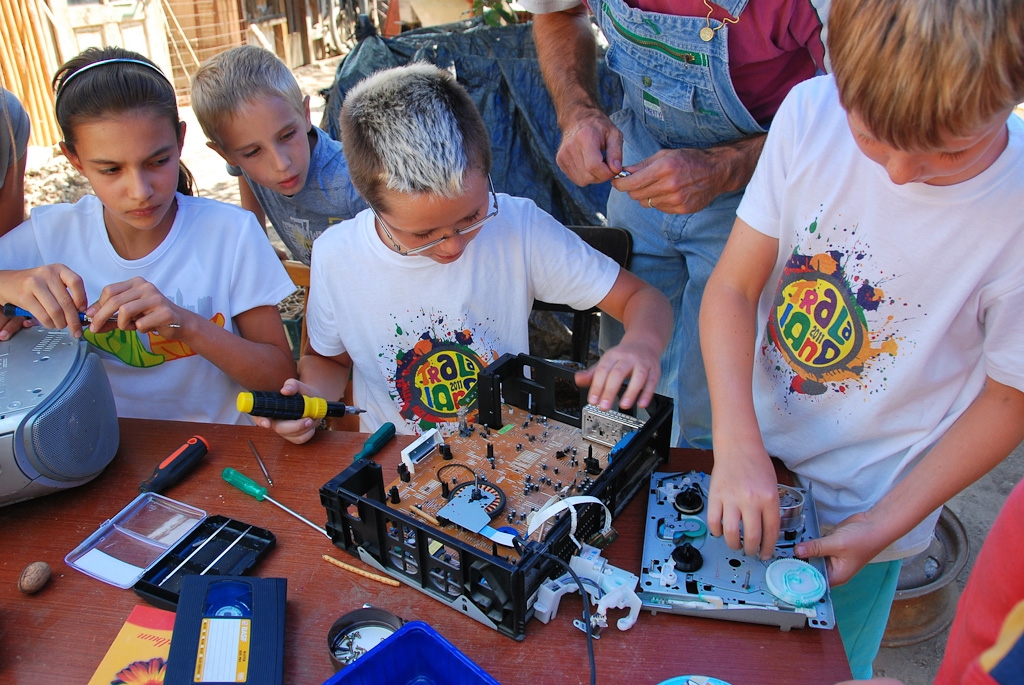 Whenever someone finds something interesting, they call the others. 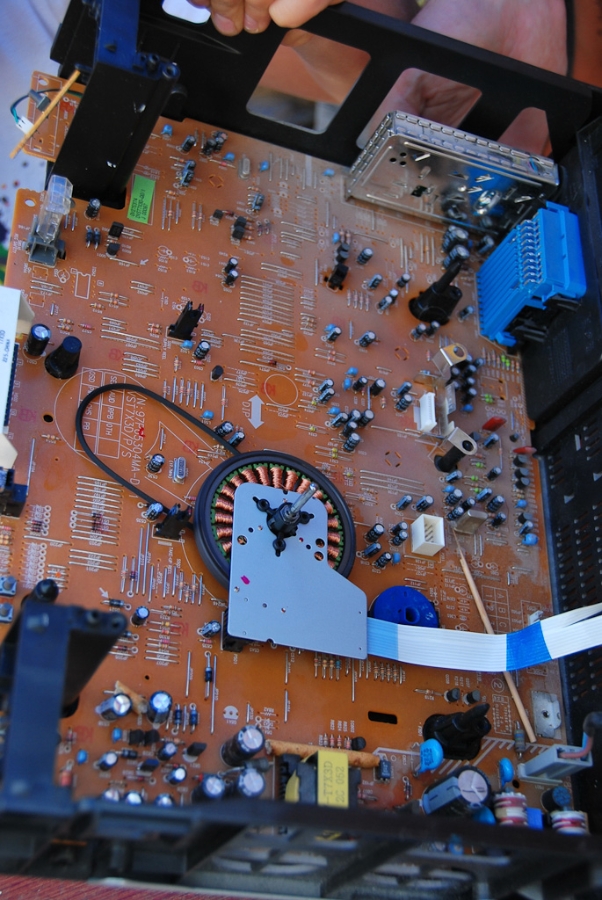 There are lots of electronic components inside, ("Look, a little city!" marveled Thomas) ... 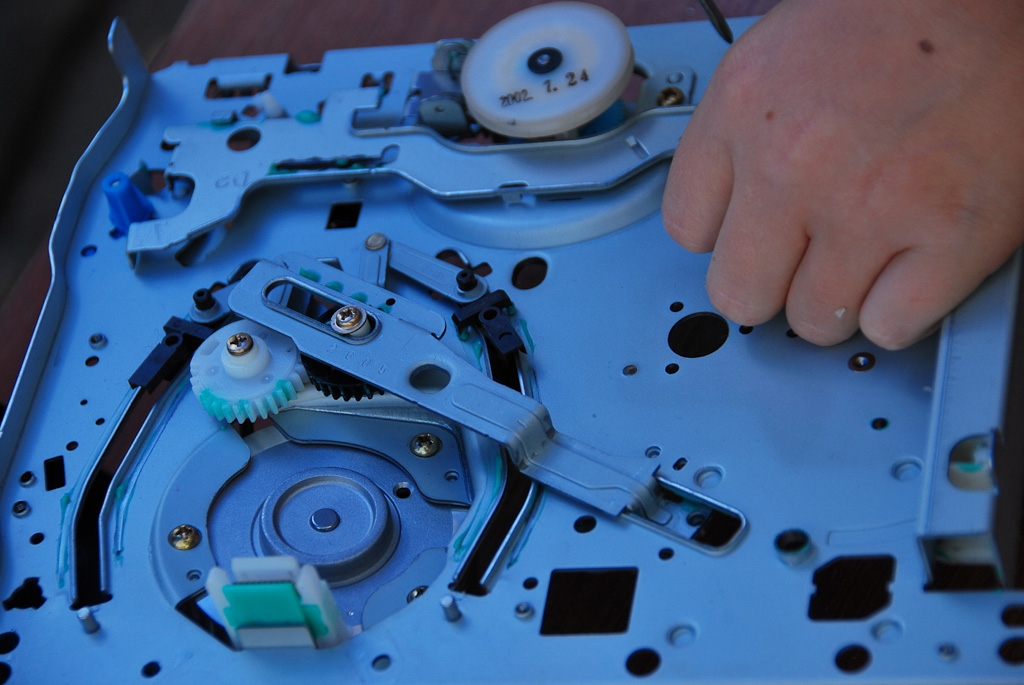 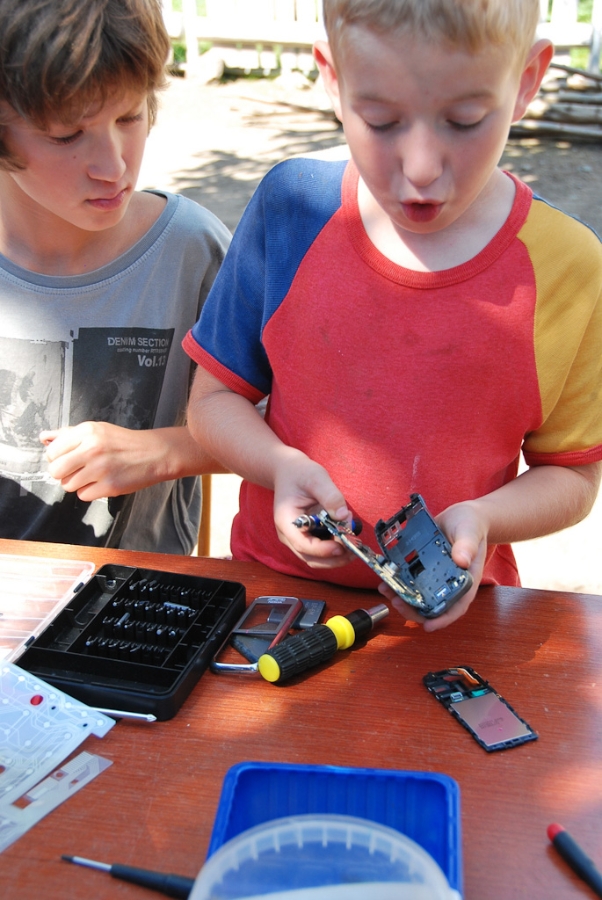 Mathias and Michael delivered a surgery to an old cell phone. Eventually they got their hands on a tiny vibration motor which is great for making a cool little bristlebots). Mathias was fascinated by the number of layers an LCD display is made of. 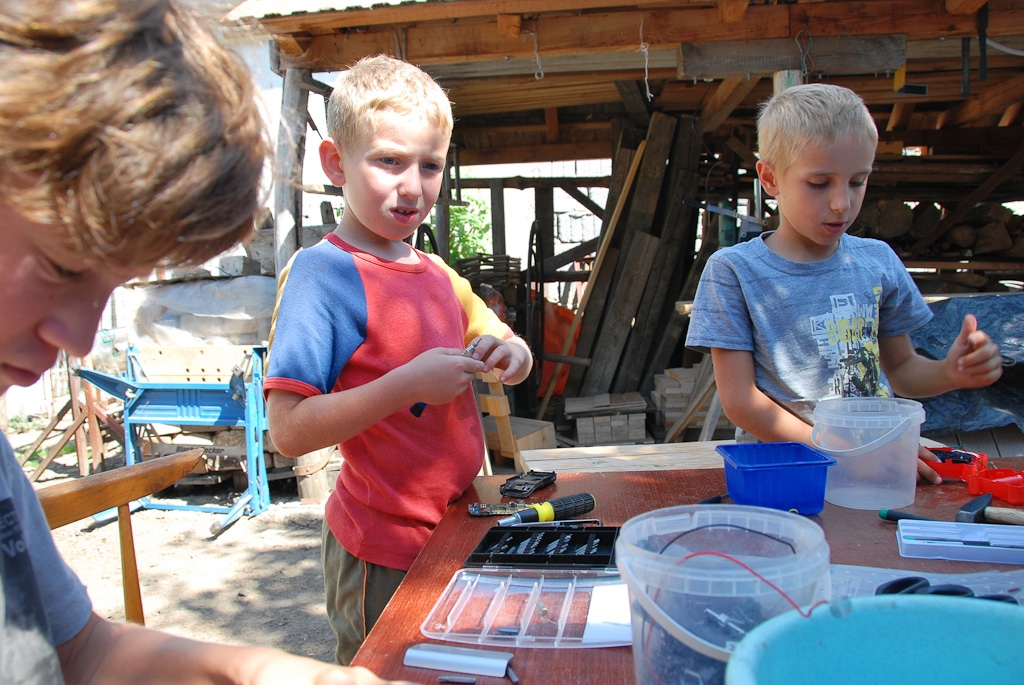 In total we salved about a dozen electric motors and collected several bowls of other interesting parts for other projects. Some kids started to discuss how they could use it for powering a some sort of vehicle.

We had kind of relaxing day today. Let’s see what we will embark on tomorrow.